Bee Blocks and Other Doings

Thank you so much for all the well wishes on Baby #4! Hopefully in about another 6 weeks we'll find out what we are having so I can start sewing for the newest babe.

This month's bee blocks are officially done.
First up, Jessica had our Imagine circle of do.Good Stitches making the ever-popular Japanese x and + blocks. She wanted them scrappy and vibrant, so that is what she will get. 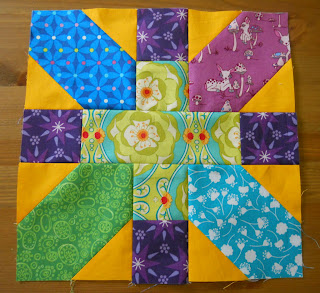 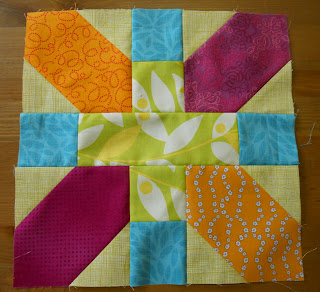 The original tutorial for this block was by Amy Gunson of Badskirt, but Jessica worked out the math to make the blocks a little larger than the original 8". Her enlarged dimensions can be found here if you are interested in making some in the larger size.

For the Modern Blocks bee, Krista sent us two fabrics, one black and one blue, and asked us to choose whichever block we wanted to make from the book. She also suggested that we could use any greys, blues, or other fabrics that fit with her mosaic. 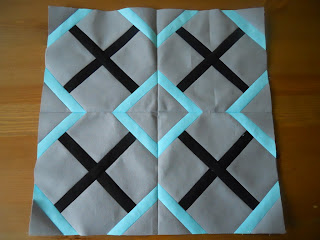 I chose the "Garden Terrace" block by Weeks Ringle and Bill Kerr. This was a fun block to put together, but it really helps to pay attention to the book, not just wing it or else you'll have a bit of seam ripping to do.

Since I still had a lot of her fabric left, I decided to make Krista another block. 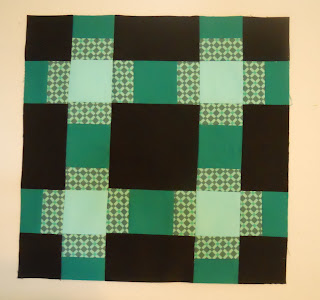 This one is the "Pathways" block, also by Weeks Ringle and Bill Kerr. I don't think I have ever used my seam ripper on one block as much as I did with this one. And it is such an easy block! Usually when I sew I move my needle over to where the edge of the foot makes a 1/4" seam guide, then  move it over one more click to make the seam fairly scant. Generally this works well for me, but in blocks like this it doesn't. I had to go back and do some adjusting on those two columns that don't have black in them so that everything would look right. Then I just kept sewing them back together wrong. For some reason my camera refuses to take an accurate picture of the colors in this block. This one is a little more true... 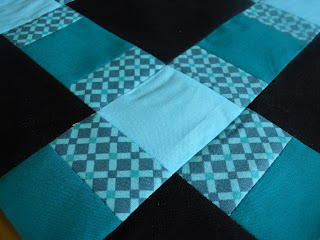 The darker solid is Kona Emerald and the other solid is a light, icy blue, not sure what it is exactly. Then the print is from Domestic Bliss by Liz Scott. I just love that line, though I think I only have two of the prints.

And now a picture to show what got pushed out of the way so I could take these pictures on one end of our dining room table... 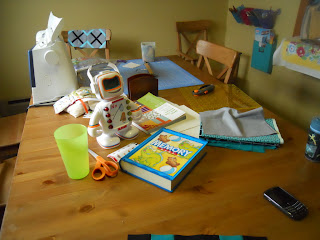 Once the kids went to sleep this afternoon, I decided it was time to start making their I-Spy placemats. I've been putting it off because I really wasn't that impressed with the charms I got in the I-Spy swap I participated in last fall. Several of them are cute, but I don't like the fabric and well, I didn't want to take the time to cut up other fabrics to use when I knew I had that massive stack of charms from the swap. It took no time at all to cut them up and I pieced one of the placemat tops just to see how it looked. 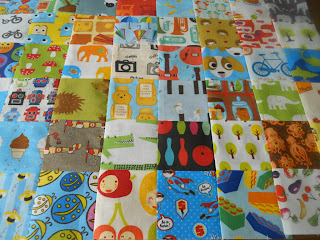 Not as bad as I thought it would be. Sure it is busy and loud, but so are my kids, right? I will say that my machine did not like sewing these fabrics. At first I thought I just needed to change my needle, so I did, but even with the new needle the fabrics kept almost getting pushed down into the needle plate and the needle was noisy going through them. I almost changed my needle again, but then I grabbed two of my usual fabrics and the needle went through them perfectly. Weird. Maybe I should have used a 90 instead of an 80?

So what did you get accomplished today, friends?
Posted by Toni at 3:18 PM