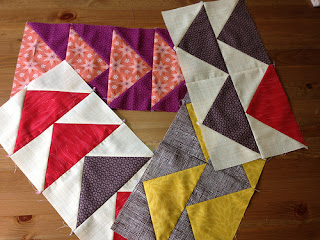 I was the quilter for the Imagine Circle of dGS in October, and chose to have everyone send flying geese blocks. I was inspired by this quilt from Ashley at Film in the Fridge, and asked for fall colors, similar to this bundle from Natalie at Greenleaf Goods. I'm still waiting for a few blocks to make their way to me, but I really like how this one is coming along. October was also Susan's month in our Modern Blocks bee and she chose the Parisian Star block, designed by Leanne Cohen. This was my first time working with the AMH voiles and I'm sure I don't have to tell you they are amazing! Paired with the osnaburg she sent for the background, Susan is going to have such an interesting mix of textures in her quilt. I showed you the beginnings of this block earlier, but here is the finished product. It was so fun and encouraging to tackle Y-seams in this block for Marci in Always Bee Learning. Amanda is the quilter this month in our dGS circle and she chose improv square-in-square blocks using black, grey, teal, navy, and white. These were fun and quick to make. Leanne sent everyone in Always Bee Learning two different fabrics and asked for improv asterisk, plus, or other symbol blocks. Another fun one to make, and that print from Chicopee is so pretty. November was my month in our Modern Blocks Bee, so I have had the pleasure of receiving many pretty blocks in my mailbox lately. The block I chose was Diamond Ripples by Lara Finlayson. I thought the block was interesting, but with 36 HSTs, it isn't one I would likely make into a quilt by myself. That makes it the perfect bee block, right? I will admit that when I chose this block I hadn't really envisioned it as a whole quilt, but I think it is going to be fabulous! Leanne even made a mosaic with her block to show how a quilt would look in a different layout than I have up there. Isn't it fun?
Posted by Toni at 6:45 AM 13 comments: Links to this post

Tuesdays at the Table: Thanksgiving Edition

Well, since it it the week of Thanksgiving here in the States, we might as well talk about it, right?
So tell me, what are your Thanksgiving traditions? Is your family the kind that doesn't mind trying new recipes for the holiday meal, or are you strict traditionalists?

I come from a family that is both. We grew up several hours away from any of our extended family, so most of the time it was just the five of us, and holiday meals weren't that elaborate of an affair. My mom enjoys trying new recipes, so while we knew there would be turkey, that was about the only constant at the Thanksgiving table. But if we were back in Iowa with the rest of the family, my mom always had to make Apple Dumplings. She is the oldest girl in a family of 9 kids and Apple Dumplings were my Grandpa's favorite dessert, so my mom was taught to make them at a young age. Even after my grandpa was gone, her brothers expected those dumplings. You could also count on seeing a pan of my Aunt Evelyn's Scalloped Corn on the buffet line, though I admit to usually passing that one by.
I married into a family that resists change. Each person has a specific dish that they are expected to bring to the holiday table. My MIL makes the turkey and noodles, her sister bakes the rolls and the dressing. One pan of "normal" dressing and one of oyster dressing. Never mind that no one wants oysters in their dressing, that is how it has always been and that's how it will remain. A cousin brings a reliable corn casserole and if a certain aunt is there, a few store-bought berry pies will be on the counter. Imagine the stress I felt as a new bride when trying to determine what to bring at Thanksgiving! All of the basics were covered and I had seen in previous visits the lukewarm reception that a new dish brought. Thankfully, they were polite and a few even seemed to enjoy the Sweet Potato Casserole I shared. Though they were all a bit shocked the next year when I brought Broccoli and Rice Casserole instead. Where were the sweet potatoes??

This year, Thanksgiving will be a small affair at my house, and I intend to completely blow their minds and try a few new recipes:
Roasted Sweet Potatoes with Apple Cider Glaze
Honey Yeast Rolls
Cranberry Apple Chutney
Pumpkin Cheesecake Crumble Bars

And yes, my MIL will be bringing the turkey and noodles. We can't have too much change... Several months ago, I won a FQ bundle of Cosmo Cricket's Circa 1934 in a giveaway on Erin's blog, sponsored by the Fat Quarter Shop. At the time, I really liked these fabrics and was so excited to have won them, since I was pretty sure I was going to purchase several of them anyway. Well, you know how sometimes you get fabric that you really like and suddenly have no idea what to do with it? That is what happened here. I thought I needed to find the perfect pattern before I broke into the bundle, and of course, that just doesn't seem to happen, so it sat and sat in my little fabric cabinet. After a while I realized that I really wasn't madly in love with these prints anymore and the bundle got pushed to the back. Of course, while I was packing everything up for the move I decided that I actually really did like this fabric, and it just so happens that these prints go really well in our new living room. Our kids are constantly taking the cushions off of our couch and laying on them on the floor, so I decided that maybe what they needed was a really big pillow instead. I went to Flickr for some inspiration and found this quilt block in my favorites and knew that I would be making a Folded Star. The original tutorial for the block was for a 12" block, but since mine was to be 24" I just did a little math to enlarge the pattern since I really had no desire to make 4 of them. (I'm pretty sure I still have my notes with the measurements if anyone wants them.) I chose to just do some simple straight line quilting on the front, but got all wild and crazy with the back. That'a right, I broke out the free motion foot.

There is definitely plenty of room for improvement, but I was surprised that it wasn't awful, because that is what I expected. You can see some spaces that could use a bit more quilting, but that is really the worst of it.  I love doing this loopy, swirly kind of motion, so expect to see more of it in the future. It will likely just be on the back of another pillow, but I may get brave and try it on a quilt soon.

How was your weekend, friends?

Mine was really pretty great. Nothing too exciting happened, but Roger was off work and didn't have much farm work to do, so we actually got to spend quite a bit of time together as a family. A few little projects around the house finally got done and I managed to squeeze in a good bit of sewing time, too. 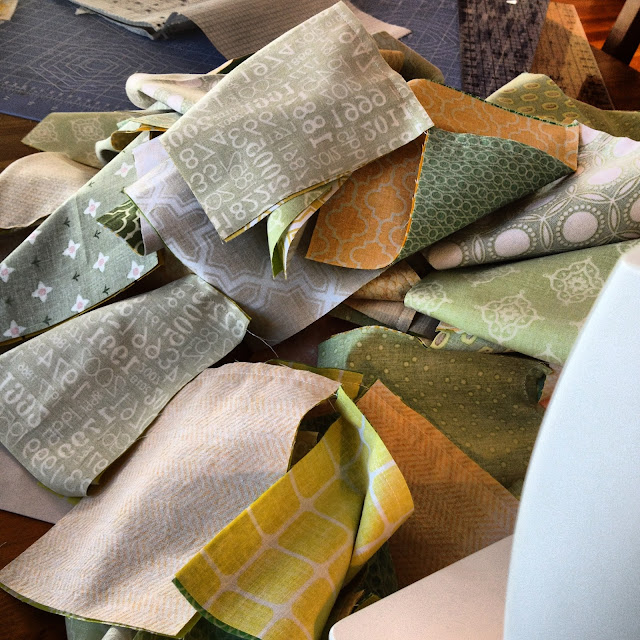 I finally started working on a quilt for Max's bed. The poor kid has been in a real bed for at least 6 months but he just gets covered with whatever random blanket we grab from their stack. Not any special pattern, just simple patchwork in green and yellow like his brothers', but his will have a few spots of orange thrown in for a little variety. 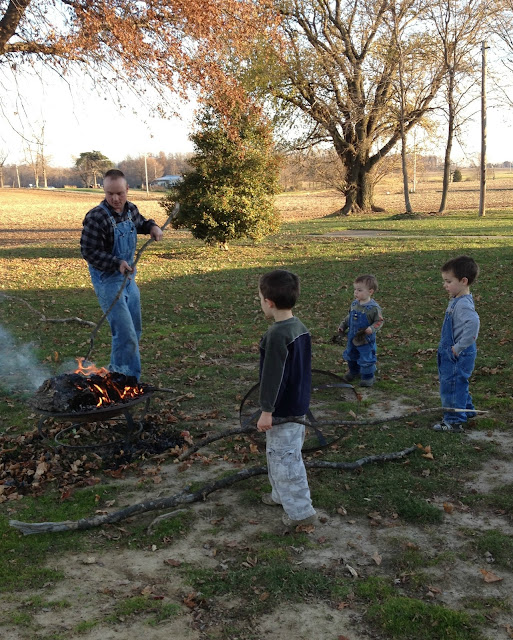 The grand finale to our laid-back family weekend was our first bonfire at our new house. We inherited this little fire pit when we moved and Wyatt has been asking to have one since we moved in, so tonight was the night. The weather was perfect and everyone had a fabulous time, even this girl. 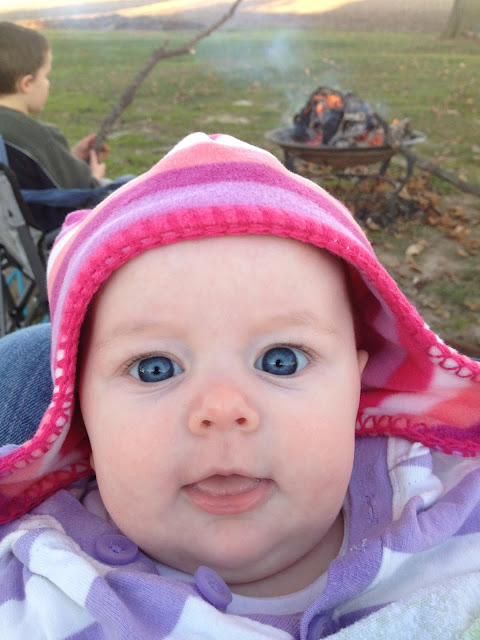 I do have a small request...if you think you have an extra hour or so in the next few weeks, consider making a block for Quilting for Kids. This is a Flickr group that makes blocks for quilts that will be made and given to children in the foster care system. The current request is for a purple/gold star block using the Reverse Rainbow Starburst Block tutorial from Diary of a Flutter Kat. It is a quick block to sew together and a fun way to use up some scraps. So tell me, what fun things did you do this weekend?
Posted by Toni at 7:22 PM 13 comments: Links to this post

I'm sure only a tiny handful of you even noticed my absence, but I've missed so much. Seriously, my Google Reader surpassed the 1,000+ mark at least two weeks ago. You know what that means, right? Mark all as read and start over! I hate doing that, but they really will never get read.

Hopefully I can catch up a bit here and there. I've stayed in the loop just a bit via Instagram and Flickr, but nothing beats hearing your blog voices, and for some reason I just don't like reading blogs on my phone. Thankfully, we finally have the Internet restored at our house and my laptop has come out of hiding. 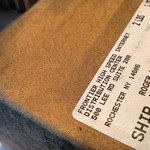 This box came five days ago and last night Roger finally had time to get it going. I'm sure I could have figured it out myself, but I had absolutely no desire to. I'm also sure that college-age Toni would be appalled, but 32-year old Toni doesn't care.

Moving into our new house has been fabulous! Sure, there are still plenty of random boxes to unpack but for the most part we are settling into this place and it feels great. 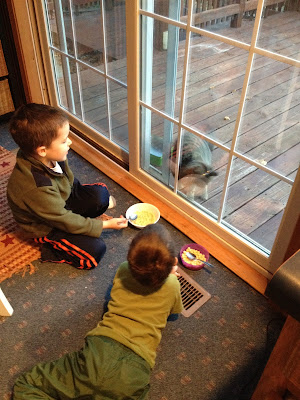 We inherited a cat when we moved in and the kids have the best time watching it through the window and arguing over who gets to feed it. Apparently they thought the cat would enjoy watching them eat breakfast. And don't you love the country blue carpet in my kitchen? What you can't see in the picture is the patriotic wallpaper. Seriously, I'll have to give you a tour of the breath-taking wall paper in this place. I love this house, but there is definitely some updating to be done. Eventually. For now I just want to relax!

I hope you all have a fabulous weekend and I can't wait to catch up! Talk to you again soon!