You know that quilt I was telling you about the other day? The one I made in college that I got sick of after piecing the top and my dear mama finished for me? Well I found it this morning so I decided to have a little quilty photo shoot today to show some of my other quilts. I had forgotten about one that I made my first son when I was pregnant with him, so it got thrown on the line, too. 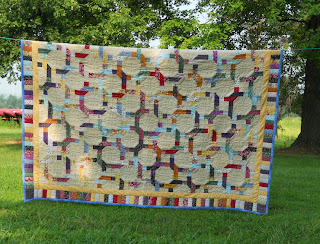 And here she is, in all her glory. Looking at it today, I realized that I really do like this design, just not the execution. It is not even close to my style today, but who knows, maybe it will be in another ten years?

Here is a little closer view of the quilting. Mom hand quilted this, bless her. This quilt is about 81" by 91". I just don't have the patience for that kind of thing right now, but I'm glad she did. 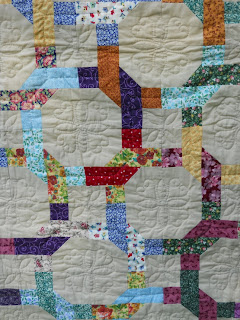 Up next we have the quilt I made when I was pregnant with Wyatt. For some reason, I thought it would be a good idea to find out what we were having but not tell anyone else but my parents. But, I made this at my parents' house when we were there for Christmas, forgetting that my brother and sister and their families would then see it. Smart. So naturally they figured out we were having a boy, but I was only a month away from having him, so my game was fun for a little while anyway. It's about a 36" square.

Had I been paying any attention at all to what I was doing, I might have fussy cut those squares so there was actually a focal point in them instead of this:

The final quilt on our tour today is the one I made for my middle son. Actually it basically matches the quilt I made for my oldest son except for the backing and a few fabrics.  And when I say "I" made them, I really mean I made the tops and Mom quilted and bound them. She's swell like that. They are both about 61" by 81". 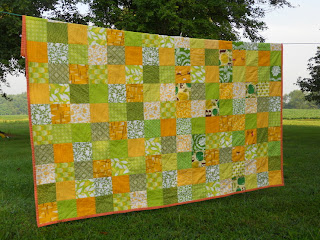 Here's the thing about their quilts...my husband really thought they should have a John Deere bedroom. I really didn't. I have no problem with John Deere, they make great tractors, but I'm not all about plastering their stuff all over my house. Two-thirds of my kids' toys are John Deere so them not getting JD bedding doesn't break my heart. This was as close as I could do. 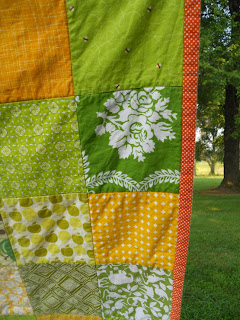 I really like the binding being orange. When I bought these fabrics I had never heard of any certain designers or modern quilting in general, I just bought what I liked. I think most of them came from Sew, Mama, Sew because I could use their "shop by color" feature.

Y'all are lucky you are even getting these pictures. Look at what was terrorizing me while I was trying to work: