One of my favorite things about summer is going to the fair. And what are two of the best parts of the fair? Of course...the food and the quilts! 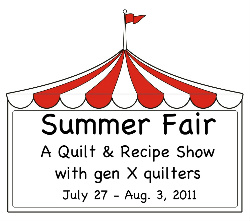 So when I saw AnneMarie's genius idea of the Summer Fair, I knew I wanted to be a part of it. The only problem was that the only quilt I have ever made all by myself lives almost 1,000 miles from me and I really didn't take many good pictures of it before I sent it to my nephew. I know many other quilters would just whip out another quilt in a day or two, but with three little boys, even simple projects can take weeks. Luckily, I had another quilt that I started earlier this year sitting in my closet, patiently waiting. 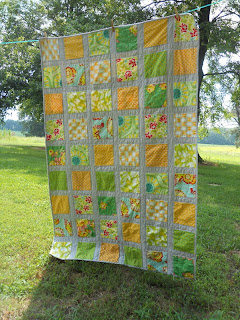 You see, early this spring I bought a new sewing machine and after I got it home I just HAD to make something. I'm a little impatient, so instead of taking the time to really plan out a quilt I just started cutting squares of my beloved Heather Bailey fabrics. Pretty soon it was sashed with some Kona Ash and the top was done. I got it backed and basted only to realize that the walking foot I had did not work with my new machine. So, the quilt got pushed to the side in favor of other sewing projects. I eventually got the walking foot but still put off finishing the quilt. 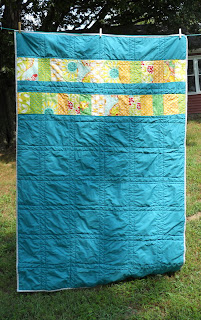 Until I heard about the Summer Fair that is. I thought it sounded like so much fun that I brought the quilt out and got to work. A few naptimes later it was finished. My second quilt was officially done and I love it. I knew this quilt was going to be used for snuggling on the couch, so I didn't want to quilt it too heavily, just straight lines through the sashing, 1/4 inch from the seams. Kona ash was definitely the safest choice for the binding, but it is what I had on hand so that is what I used. Given more time I would have liked to have been more adventurous with my binding choice. I also sewed the binding on with my machine using Rita's tutorial. I am generally not a fan of machine-binding, but as I was pressed for time I thought I would give it a shot. It was easier than I expected, but I still prefer the look of hand-sewn binding. 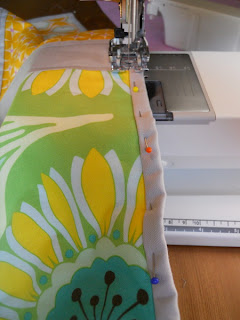 Overall, I am very happy with this quilt and learned several lessons. Most importantly, I have to pin more when I baste. The back of the quilt had several puckers that may have been prevented had I pinned a bit more. Also, I should have pressed the the top again before I quilted, but didn't want to take the time. Last, I really need to get better at recognizing the sound of an empty bobbin. Really.
How could I leave you without giving you the inevitable "baby on the quilt" shot? You're welcome. 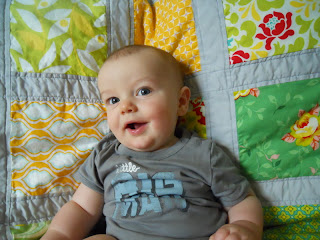 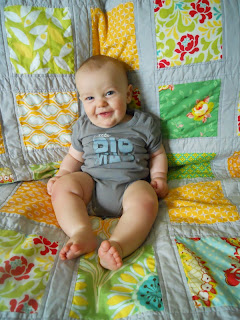 So there you have it. Thanks for checking out my exhibit at the Summer Fair!
Posted by Toni at 11:06 PM